Stripped of background as well as from proper context, with their faces covered by animal masks, a rabbit and a bird – two similar yet different figures – arouse a fair wonder: Is it a scheme of sorts? Have they come to get us? Will the twins be treading at night, yet again? Any kind of mask-clambed sleep? If you wish to make our portrait, you must see our true faces – and they are certainly not the ones underneath the masks. The rabbitbird is an elusive couple. Story-telling asserts repetition, those recurrent delights that adults forego. The child awaits, eagerly kicking in bed, pleading: Again! Tell it again! and the adult, in all her fatigue, reproduces the same story for the second time. The natural raconteur will add new details, omit worn-out specifics – colorising the told tale through tantalising intonation and punchy accents new sentiments.

The RabbitBird is a manifest compound of light and matter, an amalgam of photorealistic graffiti and projected film.

Two girls, twin-like and mirrored in body and posture, stand next to each other in identical nightdresses. The absolute resemblance (are they in fact the same person, duplicates?) is cancelled out by the different masks covering their faces. One is a rabbit, the other one a bird. 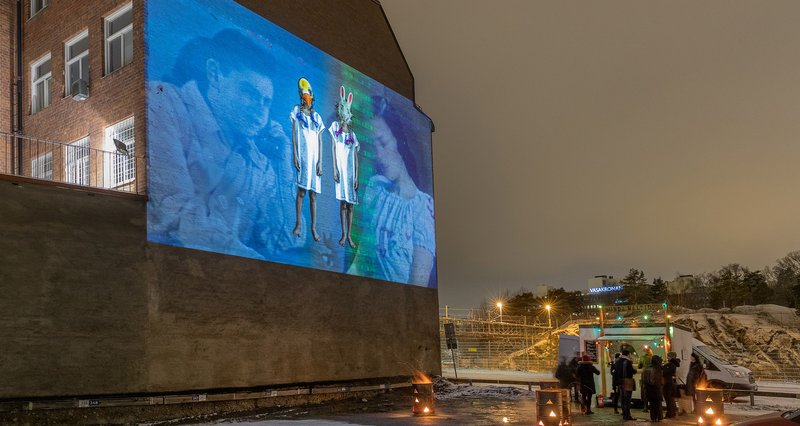 They are in fact paintings on a wall. Almost seven meters in height. Originating from one single frame from a feature-length film. The background has been cropped, the size considerably enlarged, gradients converted to fewer tones, processed image printed in sections and cut by hand on more than 300 sheets of paper, A1 size.

The "RabbitBird" was spray-painted on the windowless wall, the lateral exterior of a 6-storey building. On a rugged wall, bricks deficiently covered by a thin coating of light greyish-brown cement render, a surface intended for yet another type of coloring. 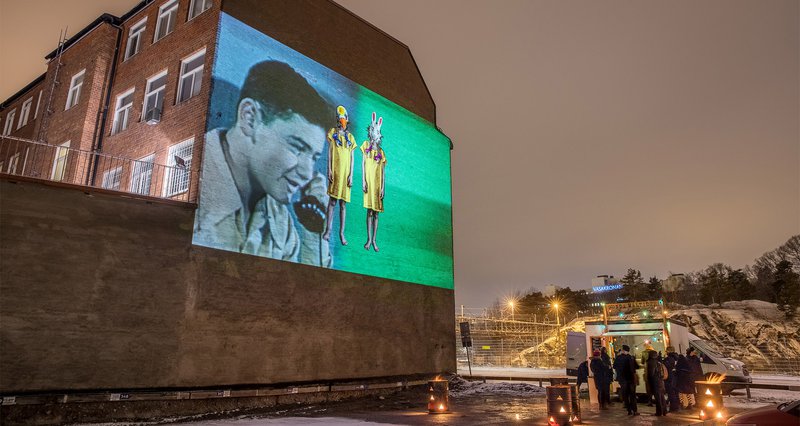 The discernible permanence of a wall painting is habitually challenged by nightfall. Engulfed in wintertime darkness from 5.30 PM and onwards, the RabbitBird is hardly visible.

Then the RabbitBird is gently faded into sight. The wall is not lit up, it remains dark. The nocturnal projection is tightly mapped to paint white light inside the contours of the twin-like girls with the animal masks.

A vertical scanline paints the nightdresses red. Duplicates of the RabbitBird are superimposed with a flickering effect, details and contours of the mural are blurred. Light on colour, colour of light. The visual consistency of the physical painting is contested as coloured light and contrast imposes deviations and complementary patterns.

The facade is illuminated with cinematic imagery, full motion video backgrounds and animated effects. The RabbitBird is masked out from the background projection, illuminated by another set of overlays: colours, images or simply darkned out, erased. 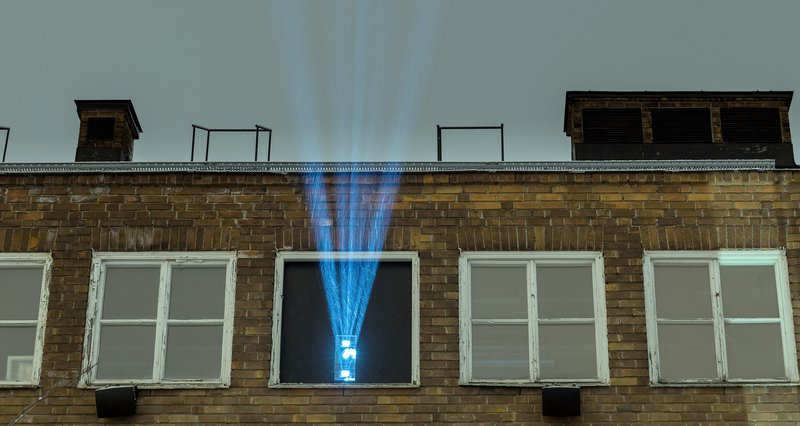 The RabbitBird, a static image-on-a-wall comes alive at nightfall. Plunged into various settings and bakgrounds, moved, manipulated, duplicated and supplemented by bands of new girls storming in with other sets of masks. The Gestalt steps out of itself, projected light is the tool for contingent shifts and alterations.

Morning scatters the darkness and projectors are automatically shut off. The RabbitBird transforms into the static image again, the primordial conception of a cave painting. Charged by reminiscent motion and the dialectics of permanence and motion, suggestive residues of the exhaustive manifestation remain as poetic excess – in personal memories and through documentations in social media.

Everything has changed. All is the same. 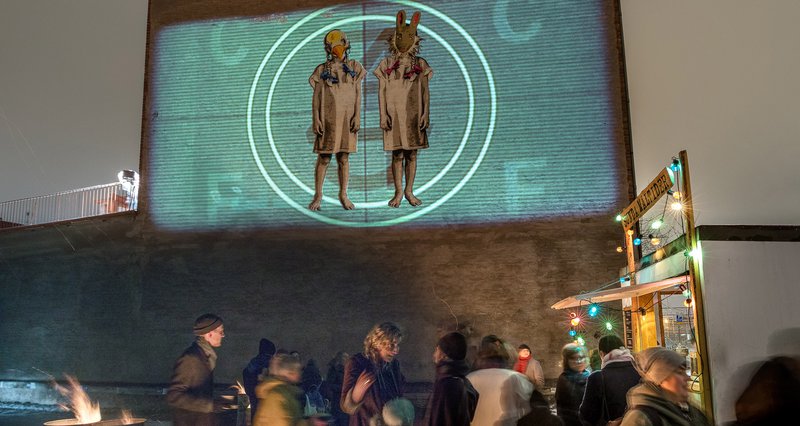 The artwork “Kaninfågeln” (The Rabbitbird) originated as part of a film by Performing Pictures, which was transformed into a wall painting by Mexican street art collective LaPiztola, and the finally became a movie again – overlaying the wall painting at night. The boundary between our physical reality and the mediated images is erased. The work is undergoing a metamorphosis – from static to cinematographic works – when the materiality of the  painted image interacts with the ethereal volatility of the projected images.

The work has been created in a unique collaboration between the Mexican street art collective LaPiztola and Performing Pictures.

In November 2017, the artist collective Lapiztola from Mexico created a stencil painting on a wall at a parking lot in Hagalund – a hidden and forgotten fire pit for those who pass through the commuter train tracks right next door. But for the youngsters who look out every day from Gelbgjutarvägen 7, where Solna’s city initiatives on young culture – Black Sheep, UnCut and Råmaterial – are situated, the firewall overseeing the parking lot is a familiar sight. Performing Pictures created a 14-minute long audiovisual composition,  giving the painting a new shape and new layers as the night falls. They  also invited young filmmakers and artists from the local surroundings and students from The Royal Institute of Arts to create own compositions that during winter’s dark nights overlay the mural painting with new stories and artistic expressions. The work has been performed as part of the urban development project Smart Creative City, run by the Film Region Stockholm-Mälardalen, and is being implemented in cooperation with Solna Stad and Humlegården Fastigheter. Participating students: Sara Ekholm Eriksson, Patricia Aramburu, Linnea Lindberg, David Roos, Edit Sihlberg. 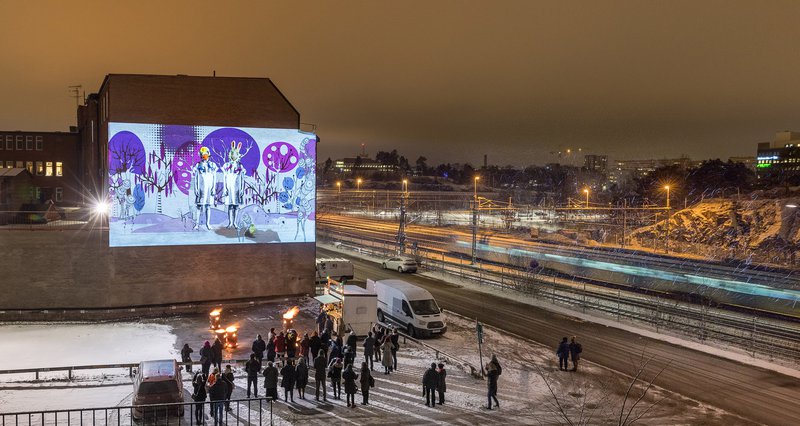 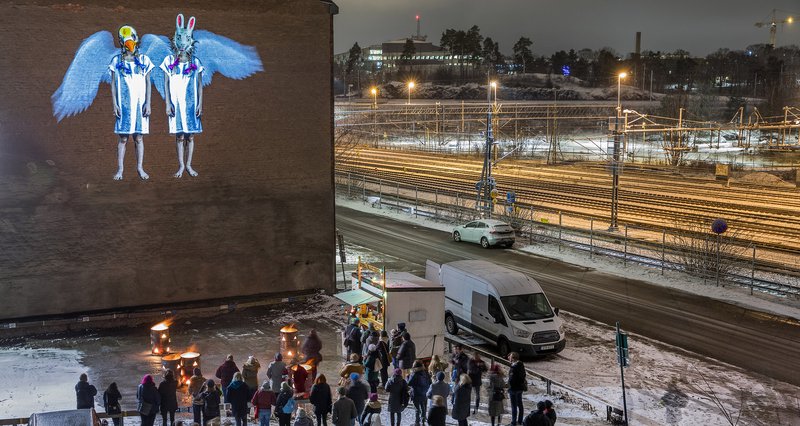 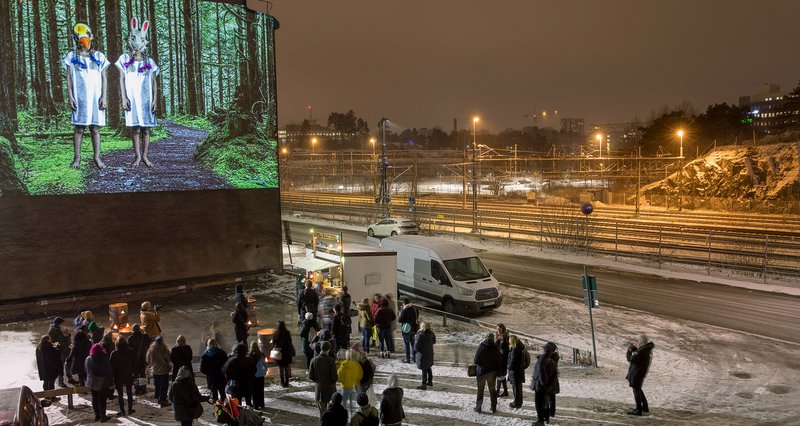